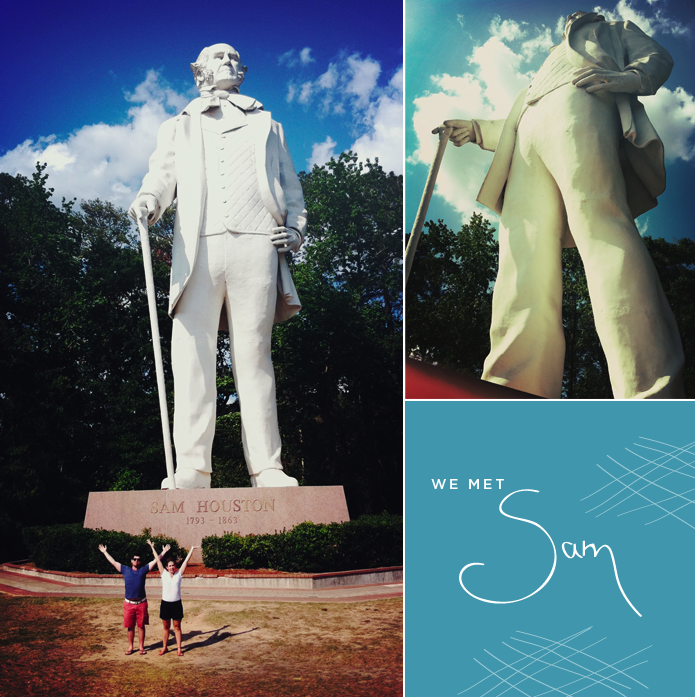 That’s right I finally had the pleasure of meeting the Sam Houston. I had no idea that he existed along the highway to Dallas but lucky for us not only does he exist but he proportionally is as big as the Statue of Liberty. I guess it is true that everything is bigger in Texas.
I now know much more about Texas history from this little trip, such as the story of the Alamo and how Houston’s army was what made the last stand for the Alamo worth it and he saved Texas. Pretty cool, right?! I also did not know that in Texas they don’t teach much United States history but pretty much Texas history, which would explain why my husband knows very little about the Civil War and the Revolution.
By the way as a side note it was 104 degrees when we took this photo. I forgot what it meant to really sweat. Not only 104 but 100% humidity. How I love Texas in the summer HA!
So we are officially in Dallas and the traffic was crazy from the parade for the Mavericks winning the title. It was really cool to be able to watch it all live this morning while drinking coffee. I honestly love Texas and the people here. They really have their own culture here and every time I come back I fall more in love with the people, culture, and landscape. If you have never visited make sure you do because they know beer, meat, dancing, cows, food in general, and may be some of the warmest people I have ever met.
Happy Thursday! I am at Starbucks getting ahead a little so tomorrow I am not feeling swamped in the morning tomorrow.
PS. best guilt free Starbucks drink is passion and green tea venti with no sugar. Yeah it’s heavenly and good for you.
Comments   0