This weekend I set out to do this awesome Do It Yourselfer while it rained outside and melted all the snow…sad gross day!


This project was VERY easy and anyone really could do this. I am not the best sewer in the world and I did stab my finger once or twice but no blood was shed. I saw this project on 100 Layer Cake a while back and was in love with it and knew it would look great on my girls’ dresses in the wedding. So I went and bought fabric for it. Here is the link to the post from 100 Layer Cake: Ruffly Belts


For mine I used ivory colored grosgrain ribbon that was 1.5 inches and I chose fabrics that tied into my theme for the wedding. I wanted a lace that looked similar to my dress, a light cotton, a taffeta, silk, and a toile. The colors did not all match perfectly but I wanted it that way. Some texture, variety, and contrast add visual interest. I plan on carrying this over to my flower girl who is wearing a white dress so I will do all navy for her belt.


The other thing I thought through was making sure the size of the ruffles was proportionate to the girls since I did not want their belts to overwhelm their dress (or them) but simply be an accent.


Anyways, I made a ton of circles varying in size and then pinched the middle and sowed them on. I set the ruffles a little off center so they would be on the left side of each girl. Some of the belts are a little fuller than others but I think the differences in the shapes and the laying of the ruffles is the beauty of them. If I were to do them a little differently I would buy some velvet and run a strip under the ruffles to give it a more finished look since the underneath gets a little messy.


Here are the ones I have done so far. The color is a little off because of taking the photos in a darker room but I think you all will get the idea. This would even be great with a cute cardigan or to spice up a simple long sleeve tee. 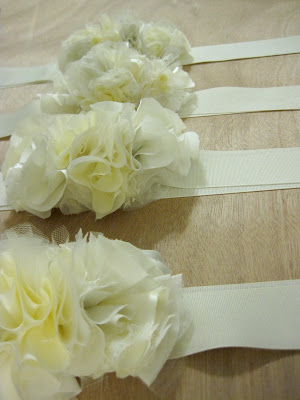 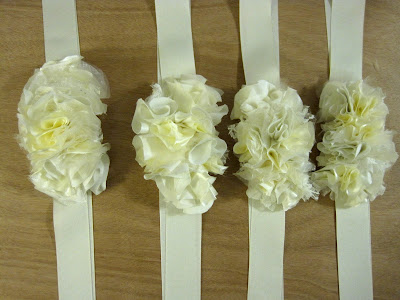